Popcorn, which is also called ‘popping corn’, is a special type of corn that expands from the kernel and puffs up when heated. Popcorn is able to pop because its kernels have a hard moisture-sealed hull and dense starchy innards.

When the Kernel is heated, pressure starts to build up within the kernel, and eventually there is a small pop which results in popcorn.

Popcorn has been used by humans for over 5,000 years. In fact, the oldest popcorn ever found was discovered in central New Mexico in the “Bat Cave”. These ancient corn kernels are thought to be about 5,600 years old.

Also kernels have been found in tombs in Peru, these ancient kernels of popcorn were so well preserved that they can still pop.

In fact, Archaeologists have found 80,000-year-old corn pollen below Mexico City, so corn has been used for a very long time, by us humans.

Today, popcorn is typically thought of as a snack food, but popcorn was once a popular breakfast food and was grounded and had with milk or cream.

Popcorn’s availability to the masses increased rapidly in the 1890s when Charles Cretors’ invented of the popcorn maker. Charles Cretor owned a candy store in Chicago, during this time he created a number of steam powered machines for roasting nuts. He also used these machines and technology to pop the corn kernels and applied the technology to the corn kernels. From here we saw the advent of popcorn street vendors in high traffic areas selling their freshly popped corn.

There are around 20 popcorn growers in Australia. Growing popcorn can be difficult, and there are a number of challenges that the growers face. The biggest is quality control, making sure that no dirt or stones get picked up in the harvest. Timing in terms of harvesting the kernels is also critical in delivering a premium product to producers. It’s all about timing, making sure that the kernels have the right moisture content so they can pop. The optimum moisture content is between 13 and 14%. 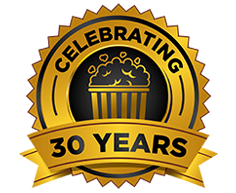